Join gaming leaders, alongside GamesBeat and Facebook Gaming, for their 2nd Annual GamesBeat & Facebook Gaming Summit | GamesBeat: Into the Metaverse 2 this upcoming January 25-27, 2022. Learn more about the event.

Graeme Devine and a couple of other game veterans at QXR Studios have launched the first part of Metropolis Origins, a digital collectible trading card game that uses nonfungible tokens (NFTs).

It’s a sequel to the Metropolis title that Devine created back in 1987, and it’s a combination of retro interests and a new ways of monetizing through the transparent and secure digital ledger of the blockchain. NFTs have exploded this year as they can use the blockchain to authenticate rare or one-of-kind digital items. But they’re also controversial, as gamers have reacted negatively to scammy games, energy usage, and other concerns. So far, not many hardcore game development veterans have dipped their toes in the NFT waters.

The cyberpunk game allows players to purchase collectible trading cards as NFTs, and I talked to Devine about it as well as his co-creators Austin Grossman and Naomi Augustine-Yee. Devine said in an interview with GamesBeat that he was concerned about how fans would react to the NFT part, but he said they have tried to design their game in the best way possible.

“We want it to be exactly like Magic: The Gathering, where you could buy a set and play the game,” Devine said. “That’s our entire model.”

The 2nd Annual GamesBeat and Facebook Gaming Summit and GamesBeat: Into the Metaverse 2

Their goal is to build a community and a narrative universe around the game, with a focus on doing the right things for gamers to allay fears that this is a fly-by-night project. I met with them at the recent Augmented World Expo in Santa Clara, California.

Above: Graeme Devine and Naomi Augustine-Yee of QXR Studio.

The studio believes in playing for fun, not grinding through repetitive interactions to make money (otherwise known as “work”). Qxr Studios sees play and storytelling as the heart of any creative endeavor.

“We founded QXR a year ago and we started to make this universe. We looked for all sorts of ways to fund ourselves,” Devine said. “We didn’t want to go with VC funding because we saw what that did to Magic Leap. We started to work on demos on WebXR, and looked for prototype funding. On the side, we started to make a Metropolis PC game that used WebXR as well.”

At the same time, the blockchain games +started taking off. Someone suggested that the team fund the effort with NFT sales.

“I thought that was a terrible idea,” Devine said. “But it stuck.”

In coming to that conclusion, Devine is a rarity so far among famous game designers.

Metropolis Origins does not support a play-to-earn feature, where players earn rewards, Devine said. Augustine-Yee said the team didn’t like that idea because it motivates players to make money rather than have fun. 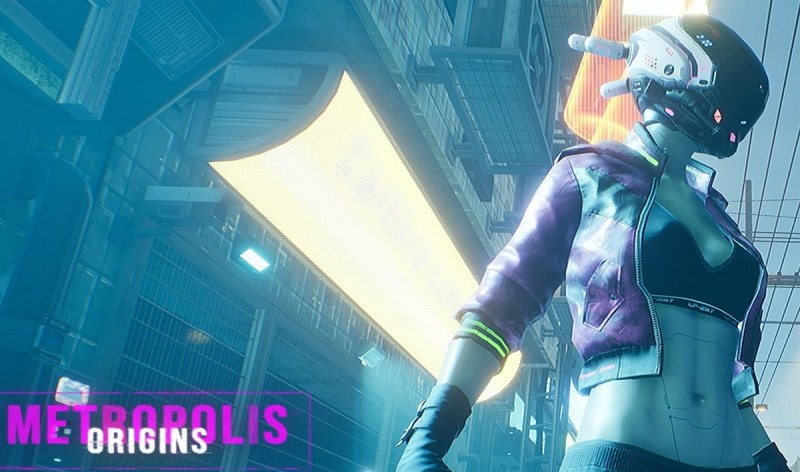 Above: The cyberpunk look of Metropolis Origins.

When QXR told fans it was working on a blockchain game, it got a visceral reaction, Devine said, as such games are associated with scams. Phil Spencer, head of Xbox, added to that notion this week when he said NFT games so far have seemed more about being exploitative than entertaining.

“A lot of those games [based on NFTs so far] are not optimized around the game design and the gameplay and the players as much,” Augustine-Yee said. “We wanted to make it more like a traditional collectible card game.”

In spite of the company’s focus on good intentions and gameplay, it has still gotten some criticism for moving into NFTs.

“I knew what NFTs are, as I wrote an article about them last year,” Grossman said, in an interview. “I had no idea about their applications in the game space. And I certainly had no idea how much people hated them. I had no idea we were going to face this much pushback.”

None of the designers come from the crypto world. They were tired of chasing investors and wanted to make a good game by learning their way in crypto.

He added, “I don’t always blame the [NFT game haters] because I think it is suspicious that a lot of people without real game development backgrounds are jumping into the space to make a quick buck. We have a bunch of game development veterans in the company and it’s a good game. People may notice that we didn’t just turn up for this to try to leverage a bubble economy.”

“I showed up to build a good card game, and that’s been my part,” said Grossman. “I have not shipped a card game before. But I played a lot of Magic: The Gathering. And I found that design principles from other genres of games like immersive sims hold true in the card game space as well.”

Devine did much of the game design and Grossman created a lot of work on the cards. 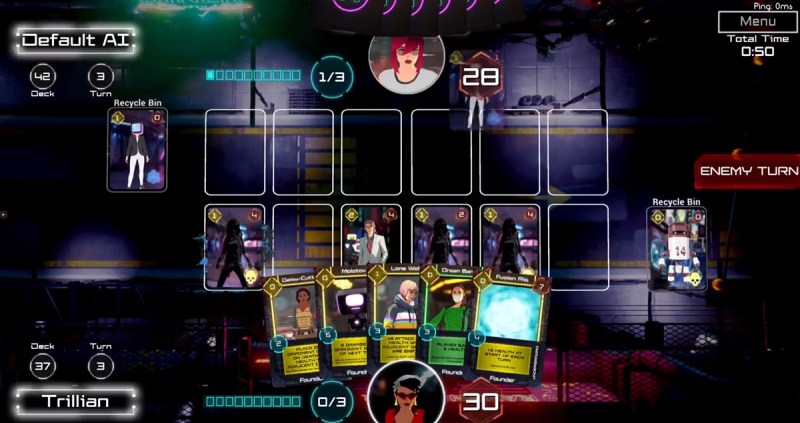 Above: The gameplay of Metropolis Origins.

Devine added, “We use ours to sell trading cards on an open market that you can play a game with. That’s is a wall-less garden, not a walled garden. Anyone can go buy the cards at an equitable price and trade them. And it’s as simple as that.”

Augustine-Yee said the team wanted people to buy cards and truly own them.

Devine said Metropolis Origins will debut on the Wax blockchain, which is designed for both security and transparency in the same way that Bitcoin and Ethereum are, but it can handle faster transactions and it’s a carbon-neutral blockchain, said David Kim, vice president of business development at Wndy.io, which helps companies get on the Wax blockchain.

Wax runs on a proof-of-stake system, rather than proof-of-work like Bitcoin and Ethereum. It doesn’t need to burn a lot of supercomputing power to complete transactions such as minting an NFT, Kim said.

“We like that one because it has low power usage,” Devine said. “It’s not burning the planet down.” 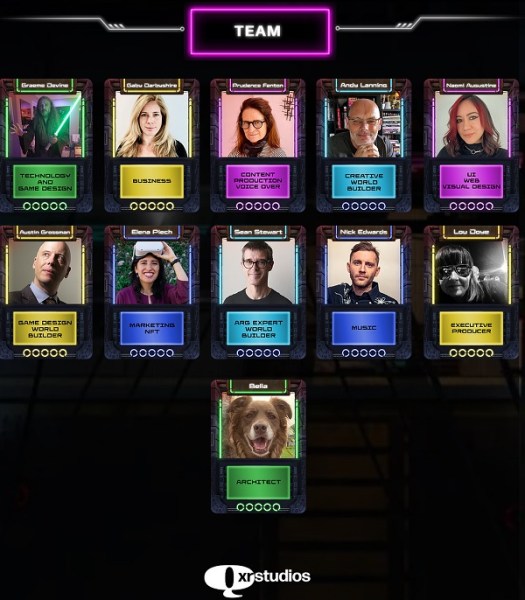 And that concern for energy efficiency is one of the things that makes this game different, Devine said. Another is the pedigree of the designers. Devine cofounder Trilobyte in 1990 and created games like The 7th Guest, The 11th Hour, and Metropolis. He went on to work on titles like Quake III Arena, Halo Wars, and was Apple’s games evangelist in the early days of the App Store. He left to make iOS games at GRL Games and later joined Magic Leap as chief creative officer.

The team came together after Magic Leap cut its consumer augmented reality glasses effort and focused on the enterprise in the spring of 2020. Most of the team consists of contractors, particularly those who made the art for the game. 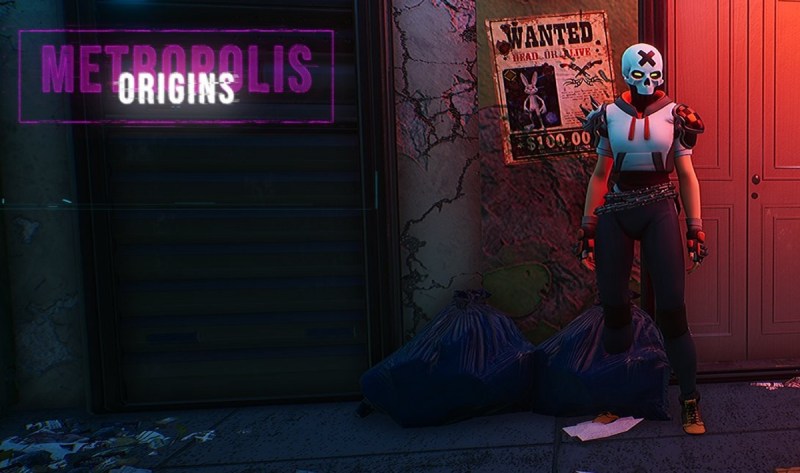 Above: Metropolis Origins is a dark world.

This week, QXR released its founders pack — a rare, limited first edition of all cards — for $50. Cardholders can play a beta build and the full version 1.0 is scheduled for the spring. The game is a fast-paced collectible card game set in a darkly humorous cyberpunk future where humans and AI coexist as equals – sometimes peacefully, sometimes not.

Based on Graeme Devine’s 1987 adventure game Metropolis, the collectible card game marks the start of a new intellectual property franchise that will be developed across multiple platforms.

Metropolis Origins plays homage to classic card games, like Magic the Gathering, but it introduces a fast-paced tactical spin on the genre. Players who own at least 50 cards will be able to play a beta build of the game. The beta build includes multiplayer and AI matches, a leaderboard, a deck builder, and custom special effects and animations. Devine considers it to be a full game, and the beta release is a contrast to other blockchain games where creators sell characters far in advance of having a game ready.

The NFT game had its limited-edition Founders Pack sale on Nov. 17. The pre-sale for website subscribers sold out in less than three minutes. A few packs are still available for purchase for the general public.

The card game is kickstarting a community, as members can participate in the franchise from the very beginning, building on the characters and the richly imagined cybernetic world. The team started a Discord community, and it has attracted players who liked Immutable’s Gods Unchained, which is a lot like Hearthstone. 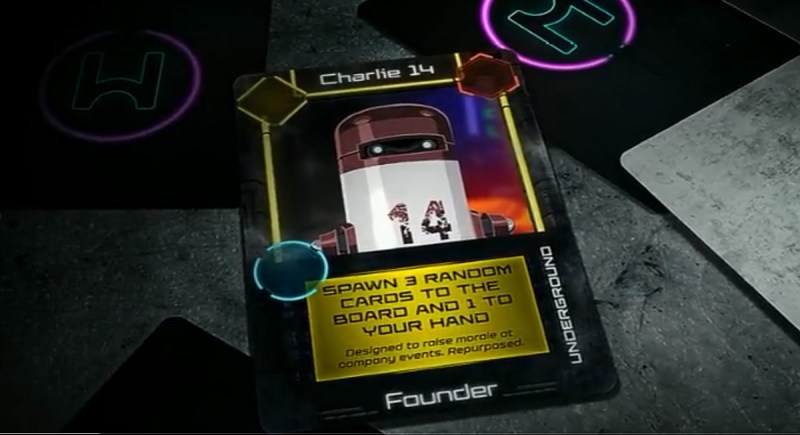 Above: A card in Metropolis Origins.

Metropolis Origins enables players to buy their cards as NFTs, giving them a permanent investment in a world that will expand over time to include new stories, games, and immersive experiences. Players can resell their cards if they wish, but QXR doesn’t get involved in those transactions.

Metropolis Origins is the first game set in Metropolis, a fictional world which will grow and develop as the team develops additional stories and games. An augmented reality experience with Snapchat, a PC game, and comic books are already on the team’s roadmap.

The cards represent either characters or robots in the Metropolis universe.

“What we want to do is build a community to be a community of citizens within a narrative manifest that extends beyond just this one game,” Devine said.

The PC game is a detective game and it is littered with QR codes. You can bring your phone up to it and jump into another environment and solve puzzles within that environment. Players will be able to chat with characters in the game.

Grossman said the game isn’t really ornate in its art style, and it has a little flavor of rogue-like gameplay in it.

“The positions of the cards on the grid matter to gameplay in a way that they don’t as much in other games,” Grossman said. “That brings a slightly different tactical flavor to it.”

The collectible cards are currently a Featured Collection on Nefty Blocks, a popular site for purchasing NFT card packs. 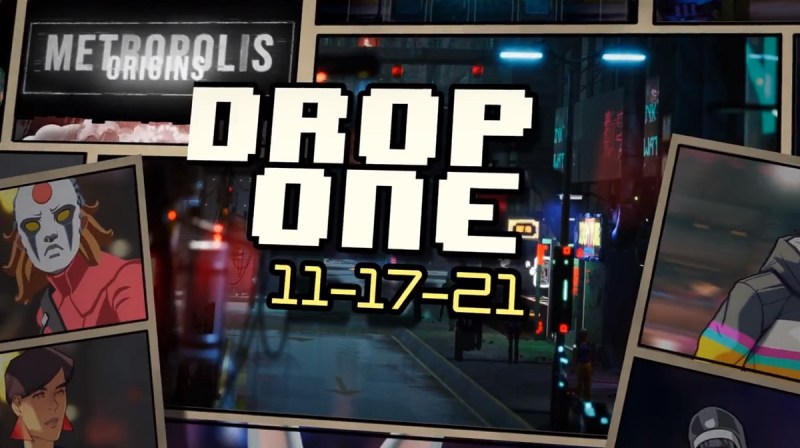 Players owning at least 50 “Founder pack” cards can already access a beta build of the game. The limited release “Founder Pack ” will be the only released cards with the words “Founder” written on them. As the Metropolis Origins game expands, “Founder Pack” owners will still be able to access the game’s original beta release.

There will also be special giveaways for “Founder Pack” owners. The first giveaway is for a rare “Early Retirement” card that was not included in the Nov. 17 drop. On Nov. 21, all players that own 50 cards and link the game to their Wax account will receive the exclusive card.

In Metropolis Origins, most cards belong to one of three different factions: Underground, Government, and Corporate. Devine said that Grossman’s hidden superpower is designing cool cards.

Devine feels a bit lonely as a game developers supporting NFTs, but he hopes more high-quality games will come into the blockchain market.

“I see lots of business execs from game companies forming companies that do NFTs,” Devine said. “But not game developers.”

GamesBeat’s creed when covering the game industry is “where passion meets business.” What does this mean? We want to tell you how the news matters to you — not just as a decision-maker at a game studio, but also as a fan of games. Whether you read our articles, listen to our podcasts, or watch our videos, GamesBeat will help you learn about the industry and enjoy engaging with it.

How will you do that? Membership includes access to: