#BTC (3-hour timeframe). In the run-up to the Fed meeting, volatility is expected to rise and there may be traditional squeezes to either side before the market decides on the direction of the next move. It is quite possible that the hunt for the stop-losses of the long positions with the slide of the asset to the correction level of 0.382 Fibonacci ($20,117) and its short-term price piercing to $19,950 before the resumption of the local uptrend. Confirmation of such a scenario will be the asset’s fixation under the exponential moving average EMA 55 3H.

After the landing of extra passengers, I expect the recovery of the asset with a breakdown of the upper border of the Flag and the movement to the exponential moving average EMA 100 from the daily timeframe ($21 150). From the point of view of technical analysis, bitcoin still has the potential to grow in the medium term, but we should keep in mind that the outcome of the Fed meeting may affect the trajectory of price movement, and be ready for it. In case the asset fixes under $19,950, bitcoin will go for correction to the area of $19,150.

#ETH. The asset’s attempts to consolidate above the resistance level around $1,600 have not been successful so far, which increases the probability of descending to the support level at $1,560. Ethereum has gained 0.5% against bitcoin over the past 24 hours.

Pick n Pay, one of the largest retail chains in South Africa, is going to offer customers the option to pay with bitcoins through any Lightning Network-enabled app. (1) The new payment method has been tested in 10 stores over the past five months and is now available in 39 stores nationwide.

Company representatives stressed the convenience of the new service, noting that the fee for each #BTC transaction is minimal, costing the customer an average of $0.04 and taking less than 30 seconds. Pick n Pay plans to roll out the new payment service to 1,628 merchants in the coming months.

I think this news is further evidence of the growing acceptance of cryptocurrencies, as more and more retail chains and stores from a variety of market segments are switching to paying for goods and services with digital assets. For example, in October, fast-food restaurant chain McDonald’s in the Swiss city of Lugano began accepting bitcoins and #USDT as payment.

In September, Telefonica, Spain’s largest telecommunications company, entered into an agreement with the Bit2Me exchange, under which the company’s customers will soon have the ability to pay with digital assets. I believe that as the cryptocurrency payment services themselves improve, the number of retailers interested in new payment services will only grow.

Alcoins: The integration of Forta (#FORT) with the Luabase platform, which presents information about the performance of its trading algorithm, caused #FORT to grow by 45% (to #USDT).

Against the background of the presentation of the new consensus mechanism by the Kaspa Project (#KAS), the value of #KAS increased by 30% (to #USDT).

The main Wall Street indices, which started Tuesday’s trading with gains, finished the session in a decline after the publication of strong macroeconomic data that increased the possibility of more aggressive measures from the Federal Reserve. At the close of trading on the New York Stock Exchange, the Dow Jones was down 0.24 percent, the S&P 500 was down 0.41 percent and the NASDAQ Composite was down 0.89 percent.

Cryptocurrency market capitalization is down 0.97% over the past 24 hours, bitcoin dominance is up 0.4%. The results of today’s Fed meeting (21:00 MSK) and the rhetoric of its representatives will determine the further movement of markets in the medium term. The most ideal scenario would be a 0.5% hike in the benchmark rate, which would allow capital to flow back into risky assets over the next month and a half. If there is a 0.75% hike, it is important to keep an eye on the comments that will accompany the measure, i.e., whether or not the rate hike is scheduled to decrease in December, which will determine the market’s reaction. 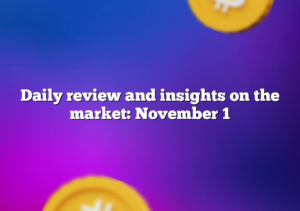 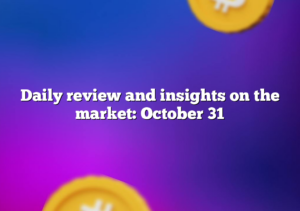 Daily review and insights on the market: October 31 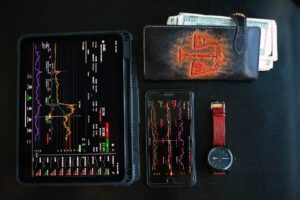